By Jim Sheng April 07, 2016
I had a walk to the town, and paid deposit for a second hand piano at Home Garden furniture shop. It costed me hundred and ten pound.

The shop is on the first floor of a building called Empire, it seems to be a cinema, but now a second hand furniture shop occupying the main lounge, Designer City at the left side, and Bob's Taxis on the right side door. So I felt a kind of sorry for the film industry, not exactly the whole film industry, it's the way of producing and distributing, the way of how people watching it. 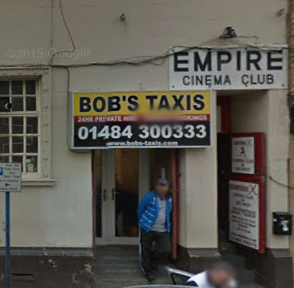 But there is always something puzzling me. I didn't know exactly what it really was. I just can feel it. Whenever I pass the building, there are always men standing outside the Bob's Taxis, the Black and White sign of "Empire Cinema Club" just over the door,  appears shabby and unattractive.

But before I wrote down this note, I check the Google Maps, and to my surprise, actually the cinema club is still operating, and it's for adult. So there IS a hidden world behind the shabby old cinema club sign!

I checked the Oracle,  my question is: Is it a right decision to buy a second hand piano? and I had the Hexagram 58, the joyous.

The two green trigram shows me the answers:

The second NINE, undivided, shows the pleasure arising from (inward) sincerity. There will be good fortune. Occasion for repentance will disappear.


The fourth NINE, undivided, shows its subject deliberating about what to seek his pleasure in, and not at rest. He borders on what would be injurious, but there will be cause for joy.

Sure enough, if you sincerely seek pleasure, you'll get it, though there is occasion for repentance. You deliberates about going to a film, and not at rest until you finally enter that door, you tell yourself that you're bordering on what would be injurious, but you just can resist the temptation.