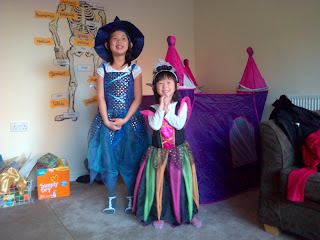 Sent from my BlackBerry® wireless device

Dressed up for Halloween party, and posed in front of their 'Princess Castle'.

They are obsessed with making a house, move tables and chairs and any 'building material' for the walls and door, and bed sheets and pajamas for the roof, adjust here and there, never tired of starting again when the house collapsed or the coat was taken away from the roof.

So one day, I asked, how about a play tent for your birthday?

Hooray! They shouted. And the night they asked their mummy to look for it on EBay  And she chose this one which is square and blue. A girl who doesn't like pink seems unusual. And it turned out that square tent is not as stable as round one, it just can't stand straight, instead, it slants to one side after two days.

The seller told me it's delivered by DHL, but inside UK, it's Parcel Force. They sent it to the local Post Office, which is run by Indian-Pakistan. The man behind the counter told me that it would be delivered to their office after 3 O'Clock, but according to the note I received this morning, it has been delivered in their office already, and I saw it sitting on their counter table . So I argued and tried to tell the Indian man that he was wrong to ask me to call Parcel Force to arrange a re-delivery. He said that I was speaking too loud, and threatened to call the police. He thinks that I am asylum seeker, who have no passport (because he asked an ID, which was not with me, so I asked if they accept Bank cards instead.), then the police would jail me or I will be deported back to China, then he could take my parcel home for his own daughter.

Noway! I said, Okay.  I wait for the Police. You gave me wrong information, I paid my service, you refused to serve me. I would like to hear what the policeman will say. Do you have CCTV or anything, yeah? He showed me the microphone.

But unfortunately, the police didn't come. They are busy, aren't they? And I don't think policemen are servants of this Indian man or or guarding dog of their Post Office, who will rush to help their master by one phone call or a whistle.

Anyway, I got my tent at last, and made a complaint against them. Parcel force said they will deal with the complaint seriously, but who cares. It seems that  no Post office isn't run by Indian-Pakistan people in UK, what could you do about them? They work hard and rich, and sometime use this kind of crafty scheme to slice a share of Parcel Force service charge. Because Parcel Force and Post Office are different organisations, I suspect the parcel force delivery driver has some kinds of under-able arrangement with that post office, deliver as many parcels to their office instead of to my door. So the post office could slice a share of the postage. The reason I say that is, this happens again and again to me and our neighbours, the parcel force driver uses all kind of excuses. Like this one, I received my miscall note three days later. The driver should gave me the miscall note the same day when he deliver the parcel to my door.

Anyway, nobody could do anything to challenge the tyranny of rich Indian Post Officers, the RoyalMail Service now is only the empty name. EIIR is only a sign on the post box. They are actually Indian.

Sent from my BlackBerry® wireless device