Focus Newsletter: Cllr posed beside a pile of dog mess 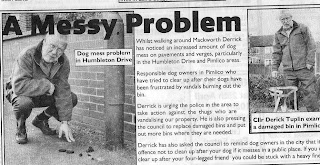 In this edition of Focus Newsletters (produced and delivered by Lib Dems), Cllr Derrick Tuplin posed beside a pile of dog mess in Humbleton Drive, showing that he "has noticed an increased amount of dog mess on pavements and verges"; he also examined "a damaged bin in Pimlico", which give "responsible dog owners", I think,  an excellent excuse not to clear up after their dogs, because they "have been frustrated by vandals burning out the bin".

Good news from Neighbourhood Forum in Mackworth, the local police were pleased to announce the lowest crime figures for 10 years. According to Wikipedia, "there are some gangs still around this area, namely CLF, the Mackworth Manz and Mackworth Mafia". I didn't know this before I move to this area, and shocked by my finding. Mackworth Forum meets in the community Centre, Prince Charles Avenue at 7 pm 21 April, 16 June, 18 August, 20 October, and 8 December.