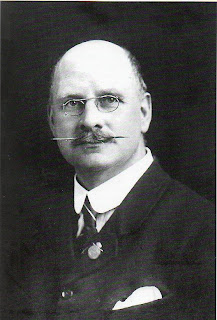 This is Sir Henry Fowler, an engineer of Midland Railway, he regarded himself as the "Father of the Club", meaning he regarded himself as the founder of Derby Railway Engineering Society.
This picture has been scanned from a book titled Derby Railway Engineering Society 1908 - 2008, by Anthony J. Broughton, this book is for the celebration of the century of one of the oldest railway engineering societies in Great Britain.
It's Sir Henry Fowler's moustache attracted my intention, rather than the railway, to be honest, it's so funny!
More funny moustache, here you may find.