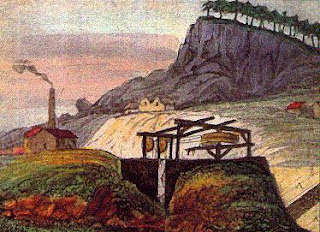 In Derbyshire, the present peace and serenity are in sharp contrast to the industrialisation and activity of former times. One of the most bustling industries is lead mining  in the 17th, 18th and 19th centuries.
According Derbyshire Villages (edited by derbyshire Federation of Women's Institutes), the lead smelting industry provided work which was anything but healthy. The flues were cleaned out twice a year when the workers had to have nose and mouth covered and to keep special clothes on shelves at the works. At dinner time all was spoon meat, broth or Irish stew or a posset in winter because they might not touch the food with their hands.
Many local people were employed by the lead mine. When lead mining was at its peak the miner's holiday was a great event. For a week in May, country dancing took place on the green, there was a gingerbread stall, donkeys to ride and greasy pole to climb - with a prize at the top of - a leg of mutton.
The moral level must have been very low. The folklore tells us that one famous character was a lady, Dorothy Matly, with the dubious reputation of being a 'curser, a liar, and a thief'. Hardly surprising then, when a young miner lost twopence it was she who came under suspicion. This she hotly denied, with a dramatic protestation that if she had taken the money the ground would open and swallow her up. The ground did open and the miner retrieved his money.
As the lead industry declined the people of the village sought employment in the quarries, the mills and on the railways.