How the first Bakewell pudding was created 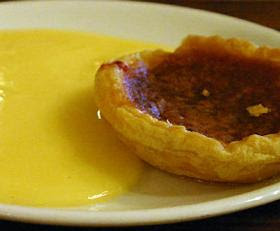 The first Bakewell pudding was created during the 19th century,  and was the result of a misunderstanding between the mistress of the rutlands Arms inn, Mrs Greaves, and her cook. On a day when important visitors were expected at the inn for dinner, Mrs Greaves instructed her cook how she wished the pastry made for a strawberry tart; the egg mixture was to be mixed into the pastry and the strawberry jam spread on top. Mrs Greaves was called away to receive her visitors and the cook either forgot or misunderstood the instruction and poured the egg mixture over the jam instead of mixing it in the pastry and what should have been a tart was now a pudding, went to the oven and thence to the table.
Dinner over, the guests sent for Mrs Greaves and complimented her upon her delicious pudding. Mrs Greaves thought it odd that her tart should be called a pudding and she questioned the cook who confessed what she had done.

By Jim Sheng January 22, 2011
Heraldry probably began with the knights in armour. When wearing a helmet in battle or in tournaments a knight could not be recognised; so he used symbols to decorate his shield and surcoat. The surcoat was the loose garment worn over the armour to protect it from rain or hot sun and actually was the "coat-of-arms"; it was decorated on the front and back with the same device as on the shield.
The correct expression for entire design is an achievement. An achievement consists of the shield, helmet, rest, wreath, mantling and motto. These are the main parts. To them can be added supporters and a compartment.

In the centre is the most important part, the shield. The surface of the shield is called the field and on it the colourful charges are placed. The shield is called the arms or coat-of-arms and can be drawn in any shape - in an upright position or slanting, which is the position it would fall into if hung on a peg. In Heraldry it slants to dexter.

Is Aladdin a Chinese?

By Jim Sheng January 31, 2009
Aladdin is an Arabic name, but he lived in China.  Is he a Chinese?
Aladdin's wonderful Lamp was included in the first European version of the Book of the Thousand and One Nights (1704-1717), but not in the original Arabic manuscript.
So it's a problem who originally invented the story,  Arabic or European? In a 19th Century Pantomime, Aladdin's hometown is Beijing or Peking, spelled "Pekin" in the report,  now capital city of China.
Derby local newspaper Mercury reported the pantomime in December, 1878. The reporter said "the representation of the city of Pekin, illuminated for a fete, is really very good indeed".  Above all, Pekin, Beijing or no, it would be found to be delightfully local in parts, with the opportunity never missed of getting  at the Derby City Council, as in on Scene:
BADROULBADOUR - And you will live here, dear Aladdin? ALADDIN -  Yes, And livery servants in most gorgeous dresses shall wait upon you - you shall hear the lark Sing from you…
Post a comment
Read more

I did some searches on the web trying to find out the true meaning of Derby City Council logo, but without success. So, I wrote to tourist information, and got the answer from Michael:
The Logo is a representation of two of Derby's oldest emblems, one being a ram the other a buck (deer). Obviously the logo is a modern interpretation of these two figures so it is not obvious unless you know what to look for. Most people do seem to agree with you that it looks like a snail however.
Ram! the curly horn of ram looks like a snail indeed. The ram and the deer are from coat of arms of City of Derby,
In this coats of arms, we can see the deers both in shield (arms) and supporter, but the…
Post a comment
Read more