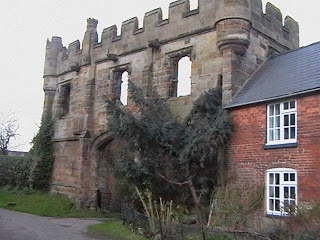 I went for a walk to Ashbourne Road, and then turned to lower road, which is a sunken lane running through the old village in  tranquil Amber Valley. Then to my surprise, I spotted a castle! When I went a bit closer and looked more carefully, this castle is actually the remains of a facade and part of the outer side walls.
You may never dreamt of a castle there, the owner of this castle may have built as a folly, because this place is strategically so low, no advantages at all in terms of defensive power, no way to resist an invasion.
AS the place name Macworth suggested, the Macworth Castle was originally a medieval fortified manor house, founded by Mackworth family, but it's exact history is something of a mystery.
There is other road names that have -worth suffix in this area , such as Isleworth.