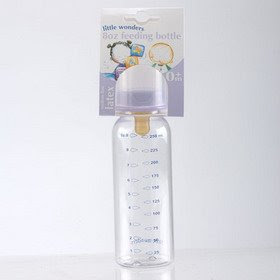 I went to Co-op shop to pay council tax, total £85. The Co-op shop was used to take credit card. but asked for debit card this time. I wonder if this is the effect of credit crunch?

Then I went to Dean & Smedley pharmacist, there is often some cheap stuffs in pharmacist shop. I bought a pack of razor for only 99 pence before. I found the cheap feeding bottle, it's called "Little Wonders Straight Bottles", which are made with FDA approved food grade polycarbonate and come complete with latex medium flow teat and sealing disc. The Straight Bottle has a capacity of 250ml/8ox per bottle, and really offers value for money.

So it seems nothing to be worried about.