By Jim Sheng October 06, 2008
One item in my daughter's School Newsletter on Monday 5th October is about "Harvest Festival":

We managed to send a whopping 57 bags of food to the Padley centre
following our Harvest celebration. Thank you on behalf of the Padley Centre for
your generous support.

Padley centre is a Derby-based charity for people with complex needs. Those people are the most socially excluded people in the local community, such as: homelessness, mental health issues, learning disabilities,drug or alcohol addiction, long-term unemployment, ex-offenders, and other people whose needs related to rebuilding a shattered life.

Harvest festival seems a remote and strange thing to me, since I left our village in south China more than thirty years ago, and moved from one city to another. Citizens don't sow for harvest, what does a harvest festival mean to us?

In my memory, we had "taste new" rituals at the beginning of autumn harvest season (the eighth month of lunar calendar), my mum made pancake from the new wheat crop and cooked other dishes of vegetables, and offered those as sacrifice with burning incense and a pot of wine to our ancestors and house gods, such as the god of wealth, the gods of house, Kitchen god, etc.

But nowadays, harvest festival comes only stealthily into my dream with my nostalgia, a remote memory of a remote Peach Tree Vale where I was born and grew up and then left forever. 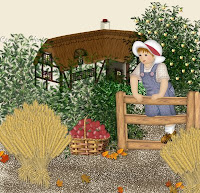 Here in UK, to most city people harvest festival is also but a name, and a date. Unlike the USA and Canada, the UK even does not have a national holiday for Harvest Festival. No more celebration than buying Henz beans or Canned Salmon from supermarket and take to their kids' school to help those "people in needs", normally a charity like Padley Centre.

But Harvest Festival has very long historical and rich cultural meaning inside. Here in UK, Harvest Festivals are traditionally held on or near the Sunday of the Harvest Moon. This is the full Moon that occurs closest to the autumn equinox (about Sept. 23, this day is very important in Druidism, or pagan's time). In two years out of three, the Harvest Moon comes in September, but in some years it occurs in October.

Harvest Festival used to be celebrated at the beginning of the Harvest season on 1 August and was called Lammas, meaning 'loaf Mass'. Farmers made loaves of bread from the new wheat crop and gave them to their local church. They were then used as the Communion bread during a special mass thanking God for the harvest. The custom ended when Henry VIII broke away from the Catholic Church, and nowadays we have harvest festivals at the end of the season. This reminds me of Lilliput and Blefuscu, two island nations in Jonathan Swift's novel Gulliver's Travels. The big end or the small end of an egg seems exactly the same as the beginning of the Harvest season and the end of it.