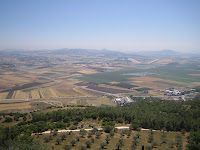 I was given a leaflet by an enthusiasitic brother at the 29 Bus stop, many of the words in the leaflet are familiar, such as Noah's ark, Pharaoh's lost army, Mount Sinai, The cities of Sodom & Gomorrah, but what's Armageddon? One of questions in the leaflet is:

"Have you ever wondered if Nostradamas was right? He claimed that the next Pope to come will be during the time of Armageddon! "

The Armageddon is a transliteration of the Hebrew "har megiddon", which means literally the "hill of Megiddo". Revelation 16:16:

"Then they gathered the kings together to the place that in Hebrew is called Armageddon."

Christian people use this place to symbolize the final great battle between good and evil. Many battles were fought at this location because the main trade route went through a mountain pass nearby.