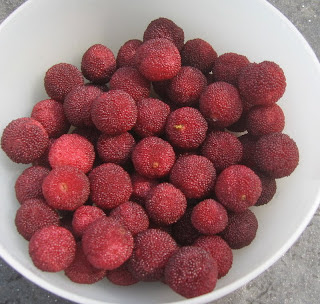 It's quite strange that Yangmei has a name "waxberry", according to wikipedia, "[1]the name waxberry may refer to the waxy fruit of plants which produce berries that can be used as a source of wax. " It's totally wrong!


Another Wikipedia article "Myrica rubra"[2] with a right picture. I think "myrica rubra" is the right name for yangmei, but might be a scientific Latin name, too difficult for common English speaking people, you might have no idea at all what the hell is a "myrica rubra", but when you see the word "waxberry", at least you can guess that this is a kind of fruit which might look like berry, similar as strawberry, blackberry, raspberry, etc. In terms of "wax", you can guess this kind of berry "might be used as a source of wax"! Although this is not right.


Even names such as "Chinese bayberry", "Chinese strawberry tree" are better than waxberry. And another newly-invented name "yumberry", is perfectly translated from Mandarin, but not popular. "Yum" sounds like either in Mandarin "Yangmei", or in English "yummy", a combined translation of sound and meaning, "hmm, the yumberry is very yummy berry!" I think Yumberry will become popular soon, because it's reported that some companies have started marketing Yumberry juice concentrate in the United States and Canada . This means you should start seeing the juice on market shelves already. Yumberry will be used in diverse applications ranging from fruit juices to bakery applications, wines, cocktails and dairy products. you can play around with the juice in cocktails and there are a lot of possibilities; although you may feel strange asking for a bottle of Yumberry juice in the store or a Yumberry Sour cocktail at a bar.


Legend has it that, Yangmei flowers blossom at midnight, and withers at dawn, so nobody has ever seen Yangmei flowers, I haven't seen it either. It's said that it's unluncky to see yangmei flowering. Some adventurous people have both curiosity and courage to find out the truth, they waits under the yangmei tree for the yangmei budding, but they could only smell the fragrance in the wind, have never seen flowers.

I am not sure how does this legend originate, is Yangmei flower very tiny? or has Yangmei very short flowering period, so it's not easy to notice?

Yangmei flowering period is 3 to 4 months, quite contrary to the legend, it's quite long, and flowers can be in bloom day and night, not just from midnight till dawn.

Yangmei fruit is green and taste very sour, but when it get ripen, it become red or even purple, and taste juicy and sweet. Heavy fruit bends branches, people can easily reach them, he just jumps a little and plucks one, so We have to guard yangmei trees when it's fruits getting ripen. Later summer afternoon, we spreaded a mat under the yangmei tree, and lied down, listened to the wind rustling through the yangmei leaves and bamboo leaves, and the cicadas singing somewhere among leaves far and near. A strong wind came through, waving the branches, shaked off one or two Yangmeis and just droped beside us, we just stretched our arm a little bit, and reached the Yummy purple Yangmei.

I often missed the Yangmei since I went to college. In one summer vacation, I came home early, and just caught up the yangmei ripen period, I went to Yangmei orchard straight away without going home first, but unfortunately it was just after a heavy summer rain, yangmei is very fresh but wet, I ate too much, and upset my stomach, I got a serious diarrhea that night.

Fresh yangmei can't be preserved for long time, so, besides fresh consumption, the fruits are commonly dried, canned, soaked in Chinese liquor, or fermented into alcoholic beverages. But we only dry them by sun, or if it's bad weather, by baking, and soak in liquor. Yangmei could be preserved for long period by these methods. The Chinese liquor has as high as 65 percent alchohol, but soaked with yangmei, the liquor will become sweet, smooth, and taste no stronger than red wine. You will drink too much without noticing you have already got drunk.


Now it's the season of yangmei, which is within later June to early July, I am really missing it!