How do you respond to strange food? 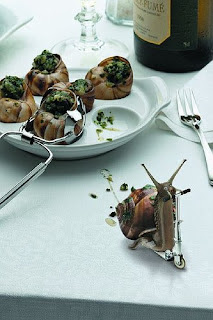 Strange food some times may be mixed up with weird food, but to me they are totally different things. We may first discuss the difference between strange and weird, one of those many anwsers I could find is: weird is something you think about for awhile, and is more eye catching, but strange is just something you notice for a second, then may stop paying attention to. This is not a linguistic explanation, but do the job. You meet a strange person first time, then you may forget him or get on with. Strange things are those you are not familiar with, but you may know a weird person for a long time, weird things are those which emerge from inside a community, but strange things may come from outside, even from a remote country.

Strange food to you may be some oriental food, such as Japanese eat raw fish, bee larvae as well bees, those are not strange food to Japanese at all; But weird food is abnormal food. For instance, we like to eat boiled rice with milk and sugar, most people may like it, but if I add gravy in it, how do you think, will you try it? We drink coffee, add milk? sugar? Oh, yes, please. But if I ask you, salt? How do you response? You may thing I am kidding.

I forgot the source of a love story, but it's kept in my mind so long that I sometime wondered why, and I concluded that was due to no other reasons but the weird salty coffee recipe in that love story. A college student came from a seaside village, he fell in love with his classmate. One day he had a chance to talk with her in a cafe, he talked about wonderful life in seaside. Whenever he got homesick, he said, he add salt in his coffee, which taste like salty sea water and smells in the sea wind! Then he won the girl's love, and they got married, and then he kept drinking salty coffee for the rest of his life. Before he die, he confessed to his wife: I am sorry, my dear, I lied to you, I cheated you on salty coffee. There were no such thing! His wife were not disappointed at all, quite contrary, she was so moved and thrilled of learning the truth, and knew the real love between them, because she thought that her husband had been drinking salty coffee for her sake for more than fifty years!

So, will you fall in love with somebody just because of the weird food or something more behind it?


Some people do add a pinch of salt and even a shake of cinnamon to the coffee grounds on a daily basis, it's said adding salt and cinnamon can cut the bitterness and brings out the coffee flavour. But they do it before brewing, not after, not add salt instead of sugar in the cup.

Chocolate was a strange food to me, because I was born in a small mountain village, while chocolate originated from outside China, during the time when I was born, you could only find chocolate in some large cities, which was imported from Western countries or Hong Kong or Japan. My next-door neighbour girl was my best playmate, but she moved to town with her family. Many years later, I visited her, we sat down on a stone bench under a large French Phoenix tree outside her house. She took out a beautifully packaged block, opened carefully, and broke one piece off, and put into my mouth. It's so bitter and strange, I spit out immediately, and sad: yuck, what's that strange stuff? She was so disappointed and said: I knew you come, and saved this just for you! What a pity! I have never seen her again since that meeting.

Cheese is not normal food in most areas of China, even rare to see especially in southern China. I tasted cheese the first time at Pizza Hut, those cheese was already melted on the pizza, and it's delicious. But one day my colleague came back from Tibetan, and brought a block of cheese for me. It looked like a block of soap, and so it tasted like! I didn't know how to eat, and reluctant to ask, so I stir-fried with bean sprouts, it's so sticky that all my bean sprounts were sticked together to a bunch. When I went to Northern Ireland, my girl friend made cheese toast for me, she cut a tiny bit of cheese, melted on the middle of the toast, looked like soft yellow chicken drop. But tasted not bad, many months later, I learned that cheese should be grated, and cover the whole top of the toast, even overflow out of the edge!

So how do you response to strange food?