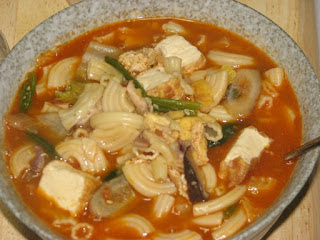 In China, we call spaghetti Italian noodles, any shaped pasta Italian "hollow vermicelli" or "hollow cellophane noodles". I could remember when I tried to cook fusilli pasta for the first time in Shanghai, I emptied half bag of pasta into the boiling water, approximately 250 grams, enough for two person. The pasta expanded to double its original size, as swollen and swirling as earthworm. I didn't know how to make it tasty, no idea of adding any sauce.

I hate Sainsbury's basic Pasta, but my wife likes to buy, because it's cheapest. The slogan on the bag is "shapes, still durum wheat". According to Wikipedia, "durum" in Latin means "hard", and "durum wheat is the hardest of all wheat".


"Place pasta in a large saucepan of boiling water. Add salt to taste and boil for 10-12 minutes, stirring occasionally. A shorter cooking time results in a more 'al dente' (firm) texture". I don't believe that you could still eat it in a shorter cooking time.

When I shared a house with a French student five years ago, I first time learned how to cook pasta, he boiled the pasta, and drained off the cooking water. Because I never knew the way to cook pasta before, I took that as the right way, but when I saw he cooked rice in the same way, I started to suspect that if that's right. Normally, boiled rice in Chinese style, no cooking water is wasted. A story could explain that. Once upon a time, a girl lived with her stepmother, such as in the story "A Princess and the Golden Shoes". Her stepmother treated her harshly, let her eat coarse food and drink cooking water drained from boiled rice, let her own daughter eat boiled rice. But surprisingly, the poor girl grown up more healthier and beautiful than her own daughter. We all think that rice cooking water is most nutritious, and shouldn't be wasted.

When pasta is cooked, strain immediately, and the cooking water cooled down and turned out to be a kind of aspic jelly, is that gelatin? I have no idea what that stuff is. But it's quite a pity to let go down the drain. So I always add as enough water as we cook rice, that's boiling pasta till it's dry.

In Italy, the pasta is often added to the sauce in its pan, mixed well and heated gently prior to serving. This way is similar as frying noodle. One of the simplest ways to serve pasta is to mix it with a little olive oil or butter and freshly ground pepper to taste, re-heat for a few seconds and stir in freshly chopped herbs or grated Parmesan cheese. Delicious also tossed in olive oil, fresh chopped tomatoes and fresh chopped basil. Both way are similar as Chinese noodle salad (cold noodle, "leng mian" in Chinese Mandarin). But I have never seen people cook pasta soup, such as noodle soup in China.

The way I cook pasta soup is like this:

To boil pasta for 10-15 minutes, prepare any vegetables and meat or seafood, add enough vegetable oil in a large deep pan heat to hot, then fry the meat to half done, then add chopped vegetables and fry them together, then add some water and bring to boiling. At last add boiled pasta with the cooking water (don't drain off cooking water, it's nutritious!). Bring to boil and simmer for five to ten minutes. If you cook seafood pasta soup, fry vegetables first. Seasoning with salt, herbs, ground peppers, all kind of stuff to your taste.

I found that pasta soup is the best way to eat durum wheat pasta, because no matter how hard pasta is, it will become soft.