Can we use a shopping cart as baby cot? 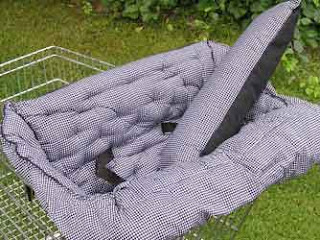 A shopping cart is called "trolley" in British English, many other names in English speaking world.

Supermarket trolleys are nested within each other in a line to facilitate moving many at one time, and to save on storage space. They normally inter-locked together, and need one pound coin to unlock. When you finish shopping, return the trolley to the trolley park, and get back your coin. One day I found that we actually can use a twenty pence coin, or an Euro coin, that's much "cheaper".

In one lucky day, I found a standalone trolley, a pound coin was still in the lock hole. So I took this trolley to do shopping, then returned the trolley and pocketed the lucky money.

In one TESCO store, all trolleys are fixed with wheel-lock, they can't be taken out beyond the car park perimeter. One day, when my trolley reached a red line, I could hear a "click", then the trolley stuck on the ground, I was quite surprised, and stooped down to check the wheel, then tried very hard to maneuver the cart. Second time, same thing happened to me, and I abandoned the trolley as the first time. This happened a third time, a woman passerby pointed out to me that I couldn't take the trolley beyond the red line, then I noticed the notice board under a tree, with a crossed out trolley on it. Only store personnel can unlock the wheel-lock with an electronic key.

This kind of wheel lock functions same as interlocking by a coin. But much safer. Because that TESCO store is situated in a very busy area. It's quite dangerous to let people take out the trolley to the road, this definitely can cause traffic jam.

Electronic wheel-lock is quite high technological, I think, only supermarket as TESCO can afford such expensive a security system. Farm Food store is situated in city center, which has less than 10 trolleys in store, it's quite funny that all trolleys are fixed with a long steel pole, which is taller than the door, to keep them inside. Sometime the shop put sale banner on the pole, customers move the trolleys around, looks like a marching band carrying many flags. If absent-minded customer push the trolley towards the door, he will definitely be stuck by the long pole.


Large sized trolley normally has baby seat installed, some even have two baby seat. We lived a traveller's life many years ago, you may feel surprised that we even used a supermarket trolley as a baby cot. When my first daughter was born, we couldn't afford a baby cot, even if we bought a cot, we couldn't take with us when we move home, and we knew that we could move our home at any time. So I had a "bright idea" one day, why can't my baby sleep in a trolley? There was a supermarket called Mr. Long near where we lived, the store logo is funny faced old man, he must be Mr. Long, he has a big smile, many wrikles on his face. The name Mr. Long is quite auspicious, and it has same sound as "dragon" in Chinese.

Mr. Long supermarket trolleys are interlocked by a pound coin. We brought home the trolley with our shopping, and stuffed with some rags and mats, and let my daughter sleep inside this semi-DIY cot.

It's quite embarrassing when health visitor or my friends came to see my daughter, so we hide the trolley in another room. I spent hours staring on my newborn baby, talking to her: "OK, you now sleep in a trolley, will you work in a supermarket as checkout cashier? or will you buy Mr. Long store or even TESCO supermarket, become a biggest shareholder?"

We returned the trolley to Mr. Long three moths later, and quite amused by the imagination that if I told Mr. Long that story, how would he response? Would he reward us for using their trolley as cot and make known to the public as an advertisement?

Many supermarket doesn't require a coin to unlock a shopping cart, one of these is Sainsbury store near where we now live. But I think there is a big problem, many people push the trolley far away from the trolley park, even out to the main road, and abandon it by the bus stop. I even see one trolley lie beside a public grassland near our estate, about 2 miles away from the Sainsbury's store.

One day I saw a woman and her son pushed a trolley full of their shoppings, her son was playing with trolley, pulled back and pushed forth, moved left and swinged right, made the trolley wobbling and wooshing, but when her mother saw us, she stopped her son and grabbed the trolley and pushed it by herself, Her son asked: "why, mum?", she said: "it's so embarrassing!"